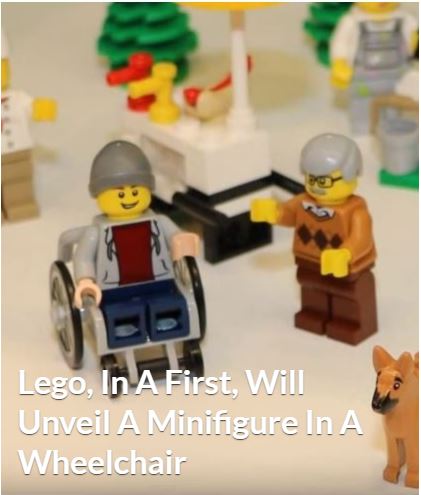 This summer, Lego will release its first-ever mini-figure that uses a wheelchair, the company says, confirming reports that emerged after one of the toys was seen at a toy fair. In recent years, the company has been urged to show more diversity in its offerings.

An image taken from a video by Lego fan website Zusammengebaut shows a new miniﬁgure in a wheelchair. The toy will go on sale in June, the company says.

German website Zusammengebaut and other Lego fan outlets published photographs of the figurine at the International Toy Fair in Nuremberg, Germany, on Wednesday, setting off celebrations among those backing a movement called Toy Like Me, which urges Lego, Hasbro, Fisher Price and other toymakers to include disabilities in some of their figurines.

Included in Lego's upcoming Fun at the Park set, the wheelchair is seen being used by a youth wearing a beanie cap and a hoodie.

"We are beyond happy right now," Rebecca Atkinson of Toy Like Me says in a statement posted online. "Lego have just rocked our brick built world and made 150 million disabled kids, their mums, dads, pet dogs and hamsters very very happy.

The wheelchair is part of Lego's City line and will go on sale in June, according to Emma Owen, Lego's spokesperson in Britain and Ireland.

"This is the first LEGO mini figure with a wheelchair, although previously there was a LEGO Duplo range, a series of the toys aimed at pre-school children, that featured an elderly man in a wheelchair," website The Mighty explains. "That set was criticized by activists for reinforcing stereotypes about wheelchairs only being for the elderly. This new figure is a part of the LEGO line aimed at older kids."

Atkinson, a journalist and disability consultant, says Lego's move "will speak volumes to children, disabled or otherwise, the world over."

More than 20,000 people have signed Toy Like Me's online petition that calls on Lego to use its toys to "help generations of kids, (both with and without disabilities), grow up with a more positive attitude to human difference!"

Send us your comments